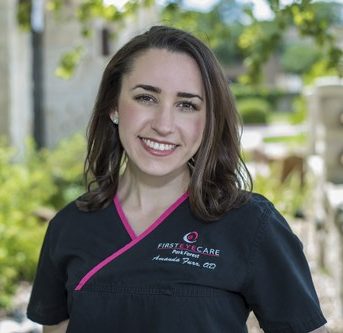 Dr. Furr joined Dr. Robert Vodvarka and the First Eye Care group in December of 2015. She received a Bachelor’s degree in Business Administration from the Neeley School of Business at Texas Christian University in Fort Worth.  She graduated from Indiana University School of Optometry in 2013 and completed a Primary Care and Ocular Disease residency at the Mt. Vernon VA Medical Center as part of the Veterans Healthcare System of the Ozarks in Missouri.

While in optometry school, she had a long list of achievements including becoming a member of the Beta Sigma Kappa Honor Society and being named the national winner of the 2013 Alcon National Case Report award.  The report she authored entitled “Relationship between asymmetric, progressive glaucoma and cervical spine injury” was chosen as the best case report submitted from all schools and colleges of optometry.  She has worked in many different clinical, hospital, and research settings, and her primary focus has been on glaucoma management, pre-operative consultations for cataract and refractive surgery, and postoperative co-management.

Dr. Furr is licensed by the Texas Optometry Board and the National Board of Examiners in Optometry.  She is a member of the Texas Optometric Association and the American Academy of Optometry.  Dr. Furr is part of the first generation of her family to be born in Texas and was primarily raised in El Paso.  In her free time, she and her husband, Scott, love playing with their two dogs, Cooper and Maya, and enjoy cheering on TCU football, IU basketball, and the Dallas Mavericks.

We are open for your eye care needs! Click here to learn more.